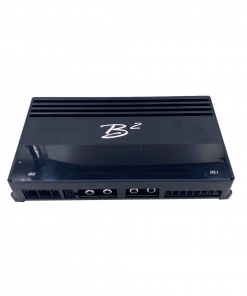 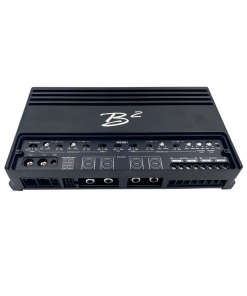 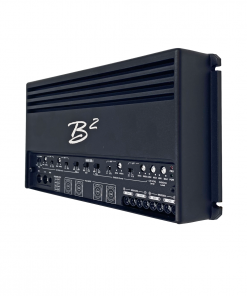 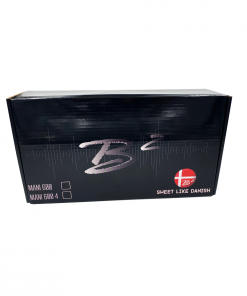 The Mani deviates from the traditional end panel design, with power, speaker & adjustments on each side of the amplifer.
Inspired by the Ref Four SQ amp, Mani’s also have a single front panel layout for all connections. But with a slight twist, as the adjustments has been top mounted for easier access. All controls are well hidden behind a smoked panel, giving the amplifier a sleek and stealthy look.
Controls

So what’s hidden underneath this panel? Given the compact size, you might not expect much? The 600.4 has a fully featured adjustment section, even surpassing some of our previous fullrange amplifiers. Upper left you have the Turn on selection with 3 different modes for amplifier start up. Switched remote, speaker offset or RCA signal detection.

Frequency 10 x multipliers offers more exact adjustment for your crossovers. Combine it with the crossover selection switch and you can configure Low Pass, High Pass or even Band Pass across all 4 channels! Talk about channels, should you want to configure the Mani 600.4 in 4 ch, 3 ch or 2 ch, the channel switch makes it simple! Enabling it, you can send RCA signal to all channels using only a single L+R signal.

The Mani 600 monoblock doesn’t have the same features due to the circuit configuration of a mono amplifier. That being said, it still offers, the same turn on features with auto detection. In addition it has an adjustable Subsonic crossover from 5 Hz ~ 40 Hz and an adjustable Low Pass from 50 Hz ~ 500 Hz. Phase issues from your subwoofer are taken care of by the built in adjustable 0 ~ 180 ° phase.
Octaves & Levels

In search of accuracy? With a 24 dB slope per octave, the Mani amplifiers offers steep attenuation from your cut off point of your crossover. Simplified, the signal output at 25 Hz will be 72 dB less than a selected 200 Hz cut off (3 octaves 200/100/50). Crossover spanning from 20 Hz all the way up to 5000 Hz, gives you the total control of your sound preference.

Both Mani amplifiers shares the same compact dimensions. Only 10.6″ x 6.45″ x 2.28″ / 26.9 cm x 16.4 cm x 5.8 cm, makes them fit everywhere. Oem installs in bikes, cars or other vehicles, might have original head units as an integrated part of the system making it hard to change. The high level feature on both Mani amplifiers handles that. The auto power on detection makes it even simplier installing these amps in oem systems. It removes the need for a 12 V remote signal.
600’s